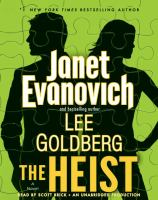 Evanovich has top billing here, but she gets some solid support from screenwriter and crime novelist Goldberg, whose own take on comedy and crime, evident in the wacky TV crime series Monk and books like My Gun Has Bullets (1995), matches Evanovich's over-the-top style to a tee. Their first book in the new Fox and O'Hare series is a near-seamless demonstration of their talents. Readers will have no trouble recognizing hallmarks of Evanovich's hugely popular Stephanie Plum books: a tough-talking gal heroine with a soft side; a sexy male costar; a wacky bunch of supporting characters; and plenty of flirty banter. The setup is ludicrous fun that demands total suspension of disbelief (no surprise there). Straitlaced FBI agent Kate O'Hare has devoted most of her career to catching internationally known confidence man, tricky Nick Fox. When she actually does it, she's horrified to realize she doesn't know what to do next. She doesn't have long to think about it though, as Nick escapes, and when she finds him, he's working for the FBI! His job: catch another con man who has made off with millions. After all, who better to catch a crook than another crook? Kate's not quite sure, but she's game to work alongside Nick, whose charms she finds difficult to deny. Together with help from new friends, the pair mounts an elaborate con that takes them from the American desert to an Indonesian island. With lots of face punching, international travel, and a few set-tos with modern-day pirates, it's all good nonsense, which promises more of the same in future episodes.--Zvirin, Stephanie Copyright 2010 Booklist

This first book in a new series by Evanovich and Goldberg follows hard-nosed FBI agent Kate O'Hare, who is on the hunt for charismatic conman Nick Fox, who besides being her query is also (unfortunately for Kate) her "dream man." Kate finds Nick, catches him, he escapes, and the next thing she knows, they're teamed at the FBI to bring down an even bigger threat. Scott Brick does a fine job narrating the book-his reading is brisk and clear. Brick especially excels at depicting the sexually charged banter between Kate and Nick. He imbues both characters with distinct personalities. Kate is uptight, struggling with her baser instincts around Nick. And Nick is magnetic-both coy and wisecracking. For readers who want a breezy adventure, this is the perfect production. A Bantam hardcover. (June) (c) Copyright PWxyz, LLC. All rights reserved.

This is the first installment in a new adventure series about a beautiful, no-nonsense FBI agent, Kate O'Hare, and a handsome, clever con man, Nicolas Fox. Kate's FBI bosses assign them to take down an international swindler any way they can, promising to disavow any knowledge of them should they get caught. It's a slick, action-packed story with surprises popping up everywhere. Nick plans the con and stays one step ahead of Kate, who keeps a few secrets of her own. Scott Brick reads the book with over-the-top accents and fast pacing. He has chosen a calm, smooth, often insinuating voice for Nick, one listeners can't help but distrust. Kate is impatient and anxious about working with Nick, leaving Brick to raise his pitch and emphasize the sibilants. He changes their voices as they enter into their roles for the con that will lure the crook from his tropical island. verdict Light fun with some sex and danger. Recommended for popular collections.-Juleigh Muirhead Clark, Colonial Williamsburg Fdn. Lib., VA (c) Copyright 2013. Library Journals LLC, a wholly owned subsidiary of Media Source, Inc. No redistribution permitted.