Weather on the air : a history of broadcast ... meteorology / Robert Henson. Read More 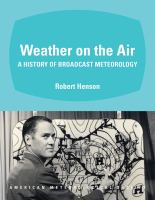 Weather on the Air : A History of Broadcast Meteorology
by Henson, Robert
Rate this title:
vote data
Click an element below to view details:

Weather on the Air : A History of Broadcast Meteorology


From low humor to high drama, TV weather reporting has encompassed an enormous range of styles and approaches, triggering chuckles, infuriating the masses, and at times even saving lives. In Weather on the Air, meteorologist and science journalist Robert Henson covers it all--the people, technology, science, and show business that combine to deliver the weather to the public each day. The first comprehensive history of its kind, Weather on the Air explores the many forces that have shaped weather broadcasts over the years, including the long-term drive to professionalize weathercasting, the complex relations between government and private forecasters, and the effects of climate-change science and the Internet on today's broadcasts. Dozens of photos and anecdotes accompany Henson's more than two decades of research to document the evolution of weathercasts, from their primitive beginnings on the radio to the high-gloss, graphics-laden segments we watch on television every morning. This engaging study will be an invaluable tool for students of broadcast meteorology and mass communication and an entertaining read for anyone fascinated by the public face of weather.
► Shelf Browser
► MARC Record