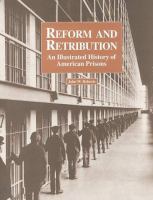 Reform and Retribution : An Illustrated History of American Prisons
by Roberts, John
Rate this title:
vote data
Click an element below to view details:

Reform and Retribution : An Illustrated History of American Prisons


This bestseller is a graphic portrayal of the many methods, philosophies, designs, and tools that have been used in the United States to punish law breakers, and to attempt to rehabilitate them. From its roots in Europe centuries ago to the latest technological advances, the ever-changing American correctional system is captured in these stark and poignant images. The author paints a dramatic portrait of the American prison while discussing the introduction of prisons as a humane alternative to capital and corporal punishment, the development of competing theories of penitentiary design and operation, the appearance of labor and education programs for inmates, the role of women as prison reformers, the rise of "scientific penology" and efforts to rehabilitate offenders, the expansion of inmate rights, and the use of "super-maximum custody" prisons.
► Shelf Browser
► MARC Record