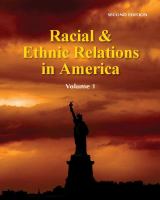 This second edition adds articles about selected programs (e.g., DACA--Deferred Action for Childhood Arrivals), events (the 9/11 attack on the World Trade Center), and movements (Black Lives Matter) that postdate the edition published by Salem Press editors in 1999 (CH, Mar'00, 37-3690). The work's stated intention is to present theory, history, current events, and issues, but the editors' mere mention in passing or omission altogether of some topics seems surprising (e.g., the US-Mexico border wall controversy, or the Buffalo Soldiers Army regiments of the 1860s), given the prominence of such matters in the news or in cultural studies during the intervening years. While revisions and inclusion of new research are evident in the general bibliography and in sources for further reading following the articles (e.g., the Holocaust entry has been notably updated), much of the content appears unchanged from the first edition. Articles about particular ethnic groups present updated demographic statistics, and some have short addenda discussing socioeconomic factors. Given the prominence today of ethnic and racial relations in historical studies, and the greater awareness of ongoing historical revision, an emphasis on insights from newer studies would have been preferred. The presentation of materials for further reading is better in the new edition, in which reference lists replace dense bibliographic paragraphs. The first edition's separate "Personage Index," the list of contributors (with affiliations), and volume-specific photo credits are absent from this second edition. Signed articles and photo cut lines take care of creator credits, but omission of author affiliation makes it harder to contact the contributors or have a sense of who is currently active. Other features include a categorized list of entries (unnecessary, in this reviewer's opinion), an inadequately updated time line (with entries that are mostly "firsts" for a single ethnic group), a section now titled "Pioneers of Intergroup Relations" (comprising short entries about selected individuals involved in events or movements, classified by identity group), plus a topically subdivided "Bibliography of Ethnic and Racial Relations" and a general index. Overall, this expensive work is disappointing as a new edition and is recommended for institutions collecting comprehensively or that do not already own the first edition. Summing Up: Recommended, with reservations. High school through beginning undergraduate students; general readers. --Kate Cleland-Sipfle, Southern Oregon University