Art/work : everything you need to know (and do) as ... you pursue your art career Read More 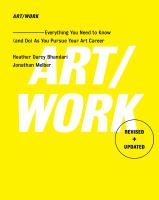 Art/Work - Revised and Updated : Everything You Need to Know (and Do) As You Pursue Your Art Career
by Bhandari, Heather Darcy; Melber, Jonathan
Rate this title:
vote data
Click an element below to view details:

Art/Work - Revised and Updated : Everything You Need to Know (and Do) As You Pursue Your Art Career

Heather Darcy Bhandari is the Director of Exhibitions at Smack Mellon, a nonprofit exhibition and studio space program in Brooklyn, New York. Its mission is to nurture and support emerging, under-recognized mid-career, and women artists in the creation and exhibition of new work. She is also an independent curator, adjunct lecturer at Brown University, and a consultant to several for-profit and nonprofit arts institutions. Heather lectures and participates in portfolio reviews and panel discussions across the country. She is on the board of directors of visual arts at Art Omi (an artist residency in Ghent, New York) and the advisory boards of artfcity (an online, art-related publishing platform) and Trestle Gallery in Brooklyn. She was on the board of NURTUREart for nearly a decade. For the last fifteen years, she was a director of Mixed Greens gallery where she curated over one hundred exhibitions while managing a roster of nearly two-dozen emerging to mid-career artists. Heather received a BA from Brown University and an MFA from Pennsylvania State University. Her career began at contemporary galleries Sonnabend and Lehmann Maupin, both in New York City. Jonathan Melber began his career as an arts-and-entertainment lawyer in New York, representing artists, galleries, collectors and a host of creative individuals and companies. He eventually left his legal practice to join the art e-commerce startup 20x200 as head of business development, later moving to LA to run content acquisition business affairs at Hulu. Today, Jonathan handles monetization strategy and digital licensing for Turner's entertainment networks. Jonathan graduated from Brown University with a degree in philosophy and received his JD from New York University School of Law, where he was an editor of the Law Review.