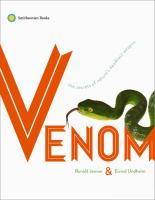 ▼ Summaries & More
Summary: "Venom brings readers face to face with some of the most dangerous creatures on the planet, including jellyfish, snakes, and wasps, as it uncovers the story of venom. The book explores how venom is used for predation, defense, competition, and communication by an incredible diversity of species. It examines the unique methods that these species have evolved to create and deliver their deadly toxins. The book traces venom back to its origin in early jellyfish and sea anemones, and reveals how venoms have evolved dozens of times independently all across the animal kingdom since that time. And finally, it examines the relationships between these dangerous creatures and humans. Humans have not only learned to live with them, but also to benefit from them: scientists increasingly are harnessing the power of venom to create new drugs, treatments, and anti-venoms"--
"The story of venom from ancient origins to modern medicinal use"--
► Awards, Reviews, & Suggested Reads
► Additional Content
► Shelf Browser
► MARC Record
◄ Search Results Showing Item 1 of 1