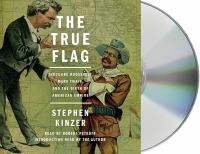 Despite Kinzer's scholarly approach, this book is about nothing more than the standard conflict between American interventionism and isolationism (anti-imperialism) going back to, and hardly going beyond, the Spanish-American War. The prolific author of The Brothers, about the Dulleses, has selected TR and his nemesis Twain to personify one dimension of this conflict, but not really. Though Teddy Roosevelt is portrayed, at length and scathingly, as a warmonger, Twain, though he periodically enters the picture, is a far lesser character here. The hero, really, is immigrant Carl Schurz, and the imposing cast of characters includes Andrew Carnegie, William Jennings Bryan (who is portrayed almost as critically as Roosevelt), Henry Cabot Lodge, and newspaperman William Randolph Hearst (the war's primary instigator), and President William McKinley. The True Flag is well written and adequate history, just not quite what it suggests it is.--Levine, Mark Copyright 2016 Booklist

Does the U.S. flag represent liberty or conquest? Kinzer (The Brothers) recounts how Henry Cabot Lodge and Theodore Roosevelt justified overseas expansion, engineered the Spanish American War, and finagled U.S. domination of Cuba, Puerto Rico, the Philippines, and Guam. Without ignoring U.S. continental expansion, he argues that this momentous shift in U.S. foreign policy initiated the rancorous, ever-relevant debate over America's role in world affairs. Anti-imperialists, including William Jennings Bryan, Mark Twain, Andrew Carnegie, and Samuel Gompers, argued that imperialism contradicted America's mission to defend liberty, warning that the nation's lust for power, territory, markets, and resources signaled the downfall of the republic itself. Kinzer's final chapter briefly covers the roller coaster of U.S. intervention and retreat from Roosevelt's presidency to the present and points out the acrimonious consequences-abroad and at home-of promoting American interests without fully analyzing diverse positions. He also discusses the legacy of the anti-imperialists, and suggests that there's still time to alter our approach to "solving" global problems. VERDICT This straightforward treatment of America's struggle to define its international posture is essential for readers at all levels as we continue this debate and wonder, "Why don't they like us?" [See Prepub Alert, 7/25/16.]-Margaret Kappanadze, Elmira Coll. Lib., NY Â© Copyright 2016. Library Journals LLC, a wholly owned subsidiary of Media Source, Inc. No redistribution permitted.

"Does intervention in other countries serve our national interest and contribute to global stability, or does it undermine both?" Journalist Kinzer's timely consideration focuses on the 1898 Spanish-American War and the resulting guerrilla war to defeat Emilio Aguinaldo's Filipino freedom fighters. Interventionists such as Theodore Roosevelt, Henry Cabot Lodge, William Randolph Hearst, and William McKinley saw the need for overseas markets for surplus US goods made possible by the nation's increasing industrial output. Opponents, such as Mark Twain, Grover Cleveland, William Jennings Bryan, Booker T. Washington, George Hoar, and Jane Addams opposed US expansionism, focusing on the Declaration of Independence, which allows all people the right of self-determination. The expansionists carried the day, denying the Filipinos the opportunity to write a constitution and form a government. Kinzer argues that the events in the Philippines set the US on its path to becoming the world's policeman, and he is compelling. Though he clearly sides with the non-interventionists, a preferable term to isolationists, he presents a well-reasoned, balanced account of the events that ultimately led the US into Vietnam, Afghanistan, and Iraq. Compelling reading for all. Summing Up: Essential. All levels/libraries. --Duncan R. Jamieson, Ashland University

Acclaimed journalist Kinzer (The Brothers) spotlights the domestic discord and clamor over America's imperial ventures at the dawn of the 20th century. After a century of continental expansion, the U.S. encountered the opportunity to expand overseas by capturing Spanish colonial possessions and other territories and peoples within its reach. The nation plunged into arguably "the farthest-reaching debate" in its history with political and intellectual giants contesting "the imperial idea" to determine America's place in the world and in history. Expansionists proclaimed benevolent intent and a civilizing mission while touting the economic benefits of conquest; anti-imperialists recalled America's anticolonial origins and condemned imperialist violence and brutality. The former largely triumphed, as the U.S. soon controlled Cuba and annexed Puerto Rico, Guam, Hawaii, and the Philippines in a swift series of subjugations. In Kinzer's gripping narrative, the egotistical Theodore Roosevelt emerges in his aggressively hypermasculine fashion as the most outspoken expansionist, while Mark Twain embarks on the "least-known phase of his career" to resist the violent drive toward empire. Kinzer ably conveys the passion and ferment of this brief period, situating this grand debate in the context of U.S. foreign policy history and convincingly arguing that the imperial/anti-imperial dichotomy remains a dominant feature of the American psyche. (Feb.) Â© Copyright PWxyz, LLC. All rights reserved.