Y is for yesterday / Sue Grafton. 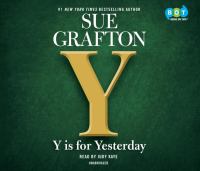 For the 25th installment of her alphabet series, Grafton intertwines crimes set ten years apart, in 1979 and 1989. In a multi-layered narrative, clever and street-smart Kinsey Millhone solves both. In 1979, four teenage boys sexually assault a 14-year-old classmate-and film the attack. The tape disappears, and the suspected thief, a fellow classmate, is murdered. One of the boys turns state's witness, and two of his peers are convicted, but the fourth-the ringleader-escapes. Now it's 1989, and one of the perpetrators, Fritz McCabe, has been released from prison. When a copy of the missing tape arrives with a ransom demand, his parents call Kinsey for help. Judy Kaye continues to provide exceptional narration. VERDICT Essential listening for series fans. Detective fiction with similar strong female detectives and fine narrators includes novels by Nevada Barr, Linda Barnes, Marcia Muller, Laura Lippman, and Sara Paretsky. ["Kinsey's fans may have to take notes to keep up with her as she untangles a web of lies and cover stories to solve the current blackmail case as well as the older murder": Xpress Reviews 7/21/17 review of the Putnam hc. The alphabet might have to end at Y, as -Grafton died on December 28, 2017.-Ed.]-Sandra C. Clariday, Cleveland, TN Â© Copyright 2018. Library Journals LLC, a wholly owned subsidiary of Media Source, Inc. No redistribution permitted.

In Grafton's penultimate Kinsey Millhone alphabet mystery, actor Kaye provides the perfect tough but feminine, self-effacing voice for the series' protagonist. 1989 is drawing to a close when Kinsey, working as a private eye, agrees to help her new clients, Lauren and Hollis McCabe deal with an extortionist. Their son, Fritz, has just completed a 10-year stint in a county youth prison for murdering a female classmate. The extortionist is demanding $25,000 to keep an old sex video, starring Fritz and an underage girl, from sending him back behind bars. The novel alternates between 1979, when Fritz and his despicable, entitled private school friends drift from a cheating scandal to the brutal killing, and Kinsey's search for the extortionist among Fritz's former peers, whom age has not improved. Kaye effortlessly takes listeners through Kinsey's sleuthing, repeating her voices for regulars, like octogenarian landlord Henry Pitts and the crazed Ned Lowe, and smoothly creating vocal characterizations for newcomers. Self-absorption is the key to her interpretations of the awful class of 1979. The well-born boys sound properly loutish, the overprivileged girls, emotional and surly. Only a skillful actress could make them sound so unappealingly entitled. A Putnam/Wood hardcover. (Aug.) Â© Copyright PWxyz, LLC. All rights reserved.

*Starred Review* This next-to-last in Grafton's alphabet series starts in 1979, when 14-year-old Iris Lehmann, a freshman at the private school where her father teaches, steals test answers to help popular junior Poppy Earl, who has befriended her, and Poppy's boyfriend, Troy Rademaker. Someone snitches about the theft, and accused snitcher Sloan Stevens is widely snubbed until a disturbing amateur sex tape falls into her hands. Then things get out of hand at an end-of-the-school-year party rife with alcohol and dope, and Sloan is shot and killed by 15-year-old Fritz McCabe. Ten years later, just after Fritz is released from juvenile detention, his parents are blackmailed by the threatened release of the tape, in which Fritz and Troy assault drunk, doped, and underage Iris, an incident all the participants label a lark. Hired to find the extortionist, Kinsey Millhone digs into decade-old events, at the same time contending with the reappearance of serial killer Ned Lowe, a lethal threat to her and to his two ex-wives. Kinsey's appealing recurring cast is supplemented by homeless Pearl, Lucky, and Lucky's big-but-gentle dog, Killer. Kinsey is persistent with cases, compassionate toward parents who lose children, and human enough to be jealous when her cousin, Anna, is romancing one of her exes. This will leave readers both relishing another masterful entry and ruing the near-end of this series. Prime Grafton. HIGH-DEMAND BACKSTORY: Even if you hadn't watched every episode of, say, M*A*S*H, you were there for the finale. Same with Grafton.--Leber, Michele Copyright 2017 Booklist