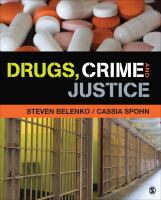 
Drugs, Crime, and Justice is an engaging, yet comprehensive, analysis of the interrelationships among drug use/abuse, crime, and justice. The first four chapters introduce readers to the interrelationships between drugs and crime, while the second later chapters provide readers with an overview of historical and contemporary policies, as well as a comprehensive review of research on policing drug markets, arresting drug offenders, and prosecution and sentencing of drug offenders in state and federal courts. Steven Belenko and Cassia Spohn also examine and assess the impact of the war on drugs and conclude with a discussion of recent policy changes such as drug courts and reform/repeal of mandatory minimum sentences and an examination of new and emerging drug policies in the 21st Century.
► Shelf Browser
► MARC Record
◄ Search Results Showing Item 1 of 1