William Tecumseh Sherman : in the service of my country : a life 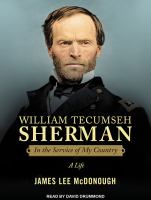 William Tecumseh Sherman : In the Service of My Country: a Life
by McDonough, James Lee; Drummond, David (Narrated by)
Rate this title:
vote data
Click an element below to view details:

William Tecumseh Sherman : In the Service of My Country: a Life

Sherman may be best known for his March to the Sea during the Civil War. This book examines not only that conquest but his entire life in tremendous detail. Sherman's father died when Sherman was young so he was adopted by a family friend. This was likely when he received the given name "William" since his father much admired Shawnee military and political leader -Tecumseh and named Sherman after him. Sherman's time at West Point is also covered. Surprisingly, he was an outlandish cadet and received several disciplinary actions from his superiors. Sherman's military career did not begin with much action or chance for glory. Once he was given a chance to lead, though, his prowess as a battlefield general was astonishing, even to his peers who respected him. Sherman's personal life, marriage, and the death of his young son are studied along with the military history. Narrator David Drummond is remarkable at reading this tome with a calm voice that includes a hint of humor, some tragic tones, and great energy during the battle scenes. -VERDICT Fans of McDonough's previous works, military history, West Point graduates, and the Civil War and Reconstruction periods will be amazed at this work. ["A well-rounded study of a man with faults who treasured his friendships, loved his country, and strove to live honestly and in service above all": LJ 5/1/16 starred review of the Norton hc.]-Jason L. Steagall, Gateway Technical Coll. Lib., Elkhorn, WI Â© Copyright 2016. Library Journals LLC, a wholly owned subsidiary of Media Source, Inc. No redistribution permitted.