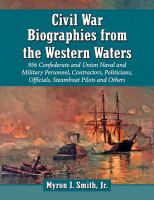 
From 1861 to 1865, the Civil War raged along the great rivers of the Ohio and Mississippi valleys. While various Civil War biographies exist, none have been devoted exclusively to participants in the Western river war as waged down the Mississippi to the mouth of the Red River, and up the Ohio, the Tennessee and the Cumberland. Based on the Official Records , county histories, newspapers and internet sources, this is the first work to profile personnel involved in the fighting on these great streams. Included in this biographical encyclopedia are Union and Confederate naval officers down to the rank of mate; enlisted sailors who won the Medal of Honor, or otherwise distinguished themselves or who wrote accounts of life on the gunboats; army officers and leaders who played a direct role in combat along Western waters; political officials who influenced river operations; civilian steamboat captains and pilots who participated in wartime logistics; and civilian contractors directly involved, including shipbuilders, dam builders, naval constructors and munitions experts. Each of the biographies includes (where known) birth, death and residence data; unit organization or ship; involvement in the river war; pre- and post-war careers; and source documentation. Hundreds of individuals are given their first historic recognition.
► Shelf Browser
► MARC Record
◄ Search Results Showing Item 1 of 1