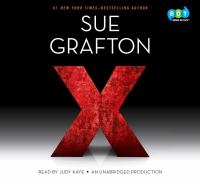 X
by Grafton, Sue
Rate this title:
vote data
Click an element below to view details:

Sue Grafton was born in Louisville, Kentucky on April 24, 1940. She received a bachelor's degree in English literature from the University of Louisville in 1961. Her first novel Keziah Dane was published in 1967. Her second novel, The Lolly-Madonna War, was published in 1969 and she adapted it into a screenplay. After that movie was released in 1973, she worked intermittently writing for television. A series she created, Nurse, ran for two seasons on CBS in the early 1980s. Her writing career took off when A Is for Alibi was published in 1982 and received the Mysterious Stranger Award. This was the beginning of the Kinsey Millhone Mystery series. B Is for Burglar won the Shamus and Anthony Awards and C Is for Corpse won the Anthony Award. She also received the Cartier Diamond Dagger, the Mystery Writers of America Grand Master Award, a Lifetime Achievement Award from Bouchercon, and the Ross Macdonald Literary Award. She died from cancer on December 28, 2017 at the age of 77. (Bowker Author Biography)