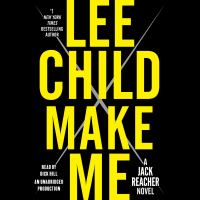 Make Me : A Jack Reacher Novel
by Child, Lee; Hill, Dick (Read by)
Rate this title:
vote data
Click an element below to view details:

Make Me : A Jack Reacher Novel

Jack Reacher number 20 (after last year's Personal) begins with the disposal of the body of someone named Keever, with a backhoe in a hog pen near a town in the Midwest called Mother's Rest, which Reacher decides to visit (as he points out, he has "no place to go, and all the time in the world to get there"). Almost immediately, he bumps into a beautiful, smart-talking damsel in distress, Michelle Chang, who's looking for her PI colleague: Keever. It should come as no surprise to Child's vast readership that Reacher and Chang will join forces to solve the mystery of Mother's Rest, and that it will involve danger, violence, some romance, snappy dialogue, sharp plotting, and lots of travel (Chicago, L.A., Phoenix, and San Francisco). Unlike the other books in the series, the monstrousness of the villainy erases the line separating crime and horror fiction. One happily familiar feature is reader Hill, who's been giving voice to Reacher since book one. Not only does he convey toughness without sounding like a 1940s B movie sleuth, his villains easily shift from good old boy bonhomie to sneering arrogance, innocents speak softly (sometimes even tremulously), and his version of Reacher's mixture of cynicism and insouciance fits the character to a T. A Delacorte hardcover. (Sept.) Â© Copyright PWxyz, LLC. All rights reserved.