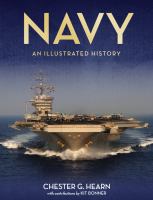 Chester G. Hearn is an American military veteran and historian. He is the author of more than twenty books, including Six Years of Hell: Harpers Ferry During the Civil War and George Washington's Schooners: The First American Navy . Three of his books have been History Book Club selections. He lives in Erie, Pennsylvania.Kit Bonner is a naval historian and photographer. He has authored or co-authored numerous books on naval history, including USS Iowa at War , Modern Warships , Great Ship Disasters , Warship Boneyards , Cold War at Sea , and Great Naval Disasters . Kit was the naval consultant for the 1997 blockbuster film, Titanic. He lives in Ione, California.