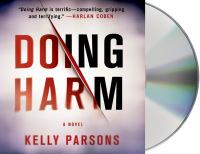 
From a stunning new talent comes a novel about medicine and moral dilemmas in which a surgeon must confront, outwit, and overcome deadly threats to his patients and himself There are many ways to die in a hospital. being sick is only one of them.   Chief resident Steve Mitchell is the quintessential surgeon: ambitious, intelligent, confident.  Charged with molding a group of medical trainees into doctors, and in line for a coveted job, Steve's future is bright. But then a patient mysteriously dies, and it quickly becomes clear that a killer is on the loose in his hospital. A killer set on playing a deadly game with Steve. A killer holding information that could ruin his career and marriage. Now, alone and under a cloud of suspicion, Steve must discover a way to outsmart his opponent and save the killer's next victim before the cycle repeats itself again and again.   A chilling and compelling thriller that also takes you into the hospital and details the politics and hierarchy among doctors, as well as the life and death decisions that are made by flawed human beings, Kelly Parsons' Doing Harm marks the gripping debut of a major fiction career.
► Shelf Browser
► MARC Record
◄ Search Results Showing Item 1 of 1