The lottery, and other stories 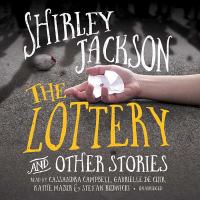 The Lottery, and Other Stories
by Jackson, Shirley
Rate this title:
vote data
Click an element below to view details:

The Lottery, and Other Stories

Shirley Jackson was born in San Francisco, California on December, 14, 1919. She received a Bachelor of Arts degree from Syracuse University in 1940. Much of her writing was done during the years she was raising her children. She is best-known for the short story The Lottery, which was first published in 1948 and adapted for television in 1952 and into play form in 1953. Her published works include articles, nonfiction prose, plays, poetry, seven novels, and fifty-five short stories. Her other works include Life among the Savages, Raising Demons, The Haunting of Hill House, which was adapted to film, and We Have Always Lived in the Castle. She died on August 8, 1965 at the age of 45. (Bowker Author Biography)