The smoke at dawn [a novel of the Civil War] 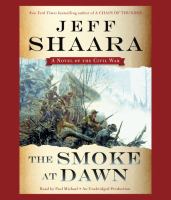 The Smoke at Dawn : A Novel of the Civil War
by Shaara, Jeff; Michael, Paul (Read by)
Rate this title:
vote data
Click an element below to view details:

The Smoke at Dawn : A Novel of the Civil War

Jeff Shaara was born in New Brunswick, New Jersey on February 21, 1952. He received a degree in criminology from Florida State University in 1974. He was a professional dealer in rare coins for many years and operated his own business in Tampa until the death of his father, Michael Shaara, in 1988, when he became actively involved in the elder Shaara's literary estate. He continued his father's work by researching the history of the characters his father had brought to life in The Killer Angels, and in 1996 his prequel, Gods and Generals, was published. The book was awarded the American Library Association's Boyd Award for Excellence in Military Fiction and was adapted into a motion picture in 2003. His other works include The Last Full Measure, Rise to Rebellion, The Glorious Cause, The Steel Wave, No Less Than Victory, The Final Storm, A Blaze of Glory, A Chain of Thunder, The Smoke at Dawn, and The Fateful Lightning. He received another Boyd Award for To the Last Man. (Bowker Author Biography)