Out of the ashes [sound recording] / Dick Couch ... and George Galdorisi. Read More 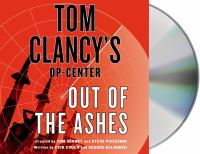 In Couch's (Act of Revenge) first entry in the late Clancy's "Op-Center" series previously penned by Jeff Rovin (War of Eagles), a terrorist act in the United States kills thousands, leading to the reestablishment of the National Crisis Management Center, aka Op-Center. As a variety of geeks and black-bag operators are put to work to identify, track down, and terminate the terrorists, the action is nonstop. Scott Sowers has a strong delivery and very clear pronunciation. He reads both narrative and dialog quite well, slightly modulating his voice to differentiate among characters. Verdict The latest in this popular series will appeal to all action aficionados and should be considered by public libraries and those libraries where this genre is in demand.-Michael T. Fein, Central Virginia Community Coll., Lynchburg (c) Copyright 2015. Library Journals LLC, a wholly owned subsidiary of Media Source, Inc. No redistribution permitted.