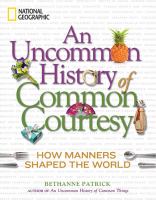 An Uncommon History of Common Courtesy : How Manners Shaped the World
by Patrick, Bethanne
Rate this title:
vote data
Click an element below to view details:

An Uncommon History of Common Courtesy : How Manners Shaped the World

20 Kinds of Kisses Â  Some cultures--including England and America, until relatively recently-- do not have a tradition of social kissing. In these societies, handshakes and sometimes hugs are the most common greetings. But many other cultures have been kissing in greeting for hundreds of years, and have evolved particular habits. Most fall under the ancient Roman category of osculum , or a kiss on the cheek. (Those classification- happy Romans also delineated basium as a kiss on the lips and savolium as a "deep kiss.") Â  Unlike the other types of kisses (some historians specify 20 kinds of kisses, but they refer to purpose, not physicality), the kiss on the cheek is usually given in friendship, greeting, comfort, or respect. In France, the tradition is known as faire la bise and generally refers to a kiss on each cheek. However, the number of kisses given varies widely according to region in France--and it also varies in other countries. In Brazil two kisses are standard, but a third might be offered for "luck" if the recipient is unmarried. One of the most entrenched traditions is in the Netherlands, where kisses of greeting between friends and relatives always number three. Women kiss both males and females three times in succession, but men generally reciprocate only with women. With other men, they con- fine physical greetings to a handshake. Although the three kisses can look like an awkward head-bobbing dance, it is terribly impolite to refuse. Â  Why? "It's a Dutch thing," is the answer. Â  But wait! Kissing three times on alternating cheeks is also traditional in Egypt, Russia, Slovenia, Serbia, Bosnia, Herzegovina, Macedonia, and Montenegro. Hmmm. Maybe not such a "Dutch thing" after all. Excerpted from An Uncommon History of Common Courtesy: How Manners Shaped the World by Bethanne Patrick All rights reserved by the original copyright owners. Excerpts are provided for display purposes only and may not be reproduced, reprinted or distributed without the written permission of the publisher.
► Shelf Browser
► MARC Record