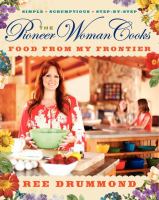 View all formats and editions (6)

The Pioneer Woman Cooks--Food from My Frontier
by Drummond, Ree
Rate this title:
vote data
Click an element below to view details:

The Pioneer Woman Cooks--Food from My Frontier

Ann Marie Drummond was born on January 6, 1969 in Oklahoma. She is an award winning blogger, New York Times Bestselling Author, food writer, photographer and television personality. She graduated from the University of Southern California in 1991, after studying journalism and gerontology. Drummond began blogging in May 2006, initially using the subdomain pioneerwoman.typepad.com within the Typepad blogging service. She registered her own top-level domain - thepioneerwoman.com - on October 18, 2006. Drummond writes about ranch life and homeschooling. A year after launching her blog, she posted her first recipe and a tutorial on "How to Cook a Steak". The tutorial was accompanied by 20 photos explaining the cooking process. Her stories about her husband, family, and country living, and her step-by-step cooking instructions and elaborate food photography, proved highly popular with readers. Confessions of a Pioneer Woman won honors at the Weblog Awards in 2007, 2008, 2009, and 2010. Her titles include The Pioneer Woman Cooks: Recipes from an Accidental Country Girl, Black Heels to tractor Wheels, The Pioneer Woman Cooks: Food From My Frontier, Charlie and the Christmas Kitty, Charlie and the New Baby. Her title The Pioneer Woman Cooks - Dinnertime made The New York Times Best Seller List in 2015. (Bowker Author Biography)