Oxford atlas of the world 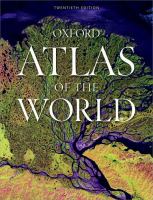 Those familiar with previous editions of Oxford's Atlas of the World will recognize the format of the 25th edition of this annually published atlas. In addition to providing world and city maps, the atlas includes sections on a number of geographic topics, such as world statistics and satellite imagery, a gazetteer with information on nation states, and sections on physical geography (such as climate and geology) and human geography (such as religion and tourism). One notable addition to the atlas is the short section "A Divided World," which examines issues related to land and sea boundaries. Those who wish to update their atlas collection will be well served by this most recent edition, which, for the cost, provides a great deal of value for readers, with quality cartography and narrative elements. An alternative is the recently published Times Comprehensive Atlas of the World (15th ed., 2018). Though the Times atlas is more expensive, this larger and more comprehensive resource may be an appropriate choice for libraries wishing to purchase a single atlas every few years. Summing Up: Recommended. All levels/libraries. --Travis Dolence, Minnesota State University Moorhead

The latest revision of Oxford's highly acclaimed Atlas of the World is as up-to-date as can be in the post-September 11 world. "Site of former World Trade Center" says one caption on an updated map of lower Manhattan- and Baghdad has been added to the 67 maps of major cities around the world, including Moscow, Lisbon and Jerusalem. Statistics on the U.S. have been updated from the 2000 Census, and a new Gazetteer of Nations offers easy reference. But the heart, and strength, of this atlas remains the hundreds of colorful, beautifully detailed maps, conveying not only topographical features but also disputed boundaries, railways and principal roads. This is an indispensable reference for students as well as anyone interested in the state of the world, from population statistics to the environment and our impact on it. It will provide hours of happy, fascinating browsing. (Dec.) (c) Copyright PWxyz, LLC. All rights reserved

Oxford University Press offers several kinds of world atlases. In decreasing order of cost and other features, the titles include: Oxford Atlas of the World, Oxford New Concise World Atlas, Oxford Essential World Atlas, and Oxford Pocket World Atlas. With Atlas of the World, the publisher successfully provides considerable detail on the world, with heavier focus on different parts of it each time-the "Images of Earth" section of the 22nd edition offers stunning satellite images of 17 cities including Washington, DC; Sydney, Australia; Calcutta/Kolkata, India; and, best of all, Naples, Italy, the photo of which clearly features Mount Vesuvius over the city. Rich investigations of the global issues reflected in the atlas are another staple of this series, this time offering a look at "The Future of the Oceans and Seas." Large color maps of continents, regions, countries, and cities are presented in groups by continent, with each section introduced by a full-spread satellite image of the continent in question. The New Concise World Atlas offers maps that are just as useful and well produced as those in the premier series of titles. There are fewer of them, and the trim size is smaller, but most libraries will do fine with what is provided. As in the larger work, the cartography is complemented by crisp satellite images, in this case of cities such as Rome; Jakarta; and Cairo (these are not the same places shown in this year's larger atlas). Missing is the expansive text that opens the larger atlas and is accompanied by relevant charts and graphs, but taking into consideration the price difference, smaller institutions will be willing to forego this analysis. VERDICT Larger libraries will do well to showcase this annual update of Atlas of the World; whereas smaller collections will be well served by the New Concise World Atlas. Â© Copyright 2016. Library Journals LLC, a wholly owned subsidiary of Media Source, Inc. No redistribution permitted.

Oxford's 24th annual Atlas of the World contains 2016 estimates of population and GDP. The full-page images of the earth have changed and now include Dubai, Boston, and Memphis. There are new city maps, including Dallas-Fort Worth and a larger, quarter-page map of Hong Kong, while the map of Dublin has been eliminated. It is not surprising that there are updates in the climate-change section, reflecting revised climate records. For a world that is always changing, this durable, colorful update belongs in all libraries, particularly those with atlases published before 2010.--Bulson, Christine Copyright 2018 Booklist