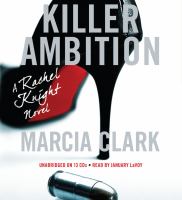 Clark's (Guilt by Degrees) real-life experience as lead prosecutor on the O.J. Simpson trial lends credibility to this story that blends Hollywood heavy-hitters and a horrifying crime. The daughter of high-profile Hollywood director Russell Antonovich has been murdered, and her boyfriend-former child star Ian Powers, who is now Russell's agent-is the prime suspect. DA Rachel Knight and her buddy Det. Bailey Keller are assigned the daunting task of trying to prove Powers's guilt. January LaVoy returns as narrator, effectively capturing the diverse personalities of Knight's inner circle as well as providing the necessary tension during the courtroom scenes. Verdict Recommend to those who enjoy legal thrillers with a female protagonist and tales of Hollywood told from an insider's perspective.-Theresa Horn, St. Joseph Cty. P.L., South Bend, IN (c) Copyright 2013. Library Journals LLC, a wholly owned subsidiary of Media Source, Inc. No redistribution permitted.

In the latest installment in Clark's series that follows the adventures of Special Trials DA Rachel Knight-and features Rachel's best girlfriend, Detective Bailey Keller-the kidnapping/murder of the daughter of a powerful Hollywood producer and director is followed by even more lawlessness. Throughout it all, the author infuses the book with moments of genuine suspense and wry humor. Narrator January LaVoy smoothly conveys the author's lighthearted cynicism. She ably captures Knight, and for Keller, LaVoy lowers her voice, adding a flat, careful, dogmatic pronunciation that both relaxes and quickens during her snappy discussions with Knight. As for the book's male characters, LaVoy opts for a minimal, vaguely masculine tone, with one exception. Clark describes the arrogant, angry filmmaker as short with a voice high enough for him to be mistaken for a female. LaVoy adds her own amusing touch by giving him the sound and the bark of a human Chihuahua. A Mulholland hardcover. (June) (c) Copyright PWxyz, LLC. All rights reserved.

*Starred Review* With her third legal thriller featuring L.A. Deputy DA Rachel Knight, former prosecutor Clark delivers another winner. Here the author's alterego becomes involved with Hollywood royalty and all the media attention it entails. It starts when Knight and Detective Bailey Keller begin working on the kidnapping of teenager Hayley Antonovich, only child of megaproducer Russell Antonovich. While the kidnapping turns out to be a ruse devised by Hayley and her boyfriend involving a dispute over the rights to a screenplay, it leads to murder. Trusting forensic evidence, Knight charges a Hollywood insider, a former child star who has become a pillar of the community, with the crimes, thus facing career-ending professional exile if she loses. As the media barrage intensifies, with Knight accused of acting only to get herself in the spotlight, Clark ratchets up the suspense at every turn, with even jury selection becoming a nail-biter. Boasting a feisty protagonist, a winning supporting cast, and steadily escalating courtroom drama, Killer Ambition finds Clark at the top of her game. Legal thrillers don't get much better than this.--Leber, Michele Copyright 2010 Booklist