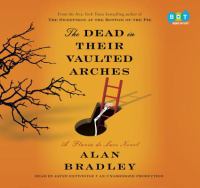 ▼ Summaries & More
Summary: On a spring morning in 1951, eleven-year-old chemist and aspiring detective Flavia de Luce gathers with her family at the railway station, awaiting the return of her long-lost mother. Flavia is approached by a tall stranger who whispers a cryptic message into her ear. Moments later he is pushed under the train by someone in the crowd. Following a trail of clues, she unravels the deepest secrets of the de Luce clan, involving none other than Winston Churchill himself.
► Awards, Reviews, & Suggested Reads
► Additional Content
► Shelf Browser
► MARC Record
◄ Search Results Showing Item 1 of 1