The demigod diaries / by Rick Riordan. 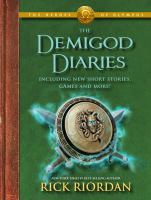 Rick Riordan was born on June 5, 1964, in San Antonio, Texas. After graduating from the University of Texas at Austin with a double major in English and history, he taught in public and private middle schools for many years. He writes several children's series including Percy Jackson and the Olympians, The Kane Chronicles, and The Heroes of Olympus, Magnus Chase and the Gods of Asgard, and The Trials of Apollo. He also writes the Tres Navarre mystery series for adults. He has won Edgar, Anthony, and Shamus Awards for his mystery novels. . (Bowker Author Biography)