The untold Civil War : exploring the human side of war 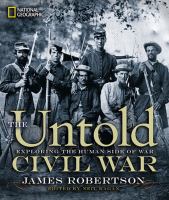 The Untold Civil War : Exploring the Human Side of War
by Kagan, Neil (Editor); Robertson, James
Rate this title:
vote data
Click an element below to view details:

The Untold Civil War : Exploring the Human Side of War

"Taps" One of the most lasting contributions Civil War to American life is the simple melody that remains our most famous bugle call. Â  The time was July 1862. The place: the Virginia Peninsula in the aftermath of George McClellan's failed offensive against Richmond. Two Union soldiers of different rank were the only actors in the drama. Â  The first was Gen. Daniel Butterfield, a 30-year-old brigade commander with a heavy, drooping mustache. Butterfield was a New York attorney and an executive with the American Express Company when the war began. Despite a lack of military training, he entered service as colonel of a militia regiment and was promoted to brigadier in late 1861. Gallant action on the Peninsula brought Butterfield a wound, elevation to major general, and eventually the Medal of Honor. Â  The other participant was Butterfield's brigade bugler. Pvt. Oliver Norton was from northwestern Pennsylvania. He too was a valiant soldier who had been wounded in the recently concluded campaign. Ultimately, Norton would gain an officer's commission. Â  At that time, two bugle calls ended the activities. The first, "Tattoo," summoned the men for roll call. A half hour or so later came the second call, signaling soldiers to extinguish lights in camp and cease all loud conversations and other noises. Â  Butterfield, a man with a good ear for music, disliked that second melody. "It did not seem to be as smooth, melodious, and musical as it should be," he stated. A better tune, he felt, would instill in men a sense of peace at the end of the day and put them at rest. Â  One afternoon in the war's second summer, the recuperating general summoned the recuperating bugler. Butterfield whistled a tune and asked Norton to play it. Neither man was pleased with the initial effort, but after repeated trials and refinements general and bugler completed the composition to their mutual satisfaction. Â  Butterfield ordered the new tune substituted at once in his camp for the original melody used to signal lights-out. That night the haunting strains of the bugle call drifted across the land for the first time. Â  The following morning, buglers from nearby brigades came to inquire about the new song. They copied the music, returned to their camps, and used it at day's end. Soon the tune was standard throughout the Army of the Potomac. When two corps from that army went west the following year, they took the melody with them. The bugle call known as "Taps" was readily adopted by the postwar U.S. Army and was played at camps as far away as Hawaii and the Philippines by the time the 19th century ended. Â  The tune is short and simple. It still sounds the end of the day. Yet it serves another purpose as well. Whenever someone is buried with military honors, the bugle notes of "Taps" form the climax of the service. Occasionally some sing the words: "Day is done, gone the sun / From the lakes, from the hills, from the sky / All is well, safely rest / God is nigh." Â  Bugler Oliver Norton wrote late in his life: "There is some- thing singularly beautiful and appropriate in the music of this wonderful call. Its strains are melancholy, yet full of rest and peace. Its echoes linger in the heart long after its notes have ceased to float through the air." Â  "Taps" is as immortal as the memory of those it honors. Excerpted from The Untold Civil War: Exploring the Human Side of War by James Robertson All rights reserved by the original copyright owners. Excerpts are provided for display purposes only and may not be reproduced, reprinted or distributed without the written permission of the publisher.
► Shelf Browser
► MARC Record
◄ Search Results Showing Item 1 of 1