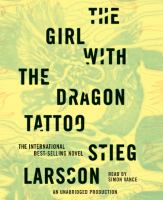 A Friday in November It happened every year, was almost a ritual. And this was his eighty-second birthday. When, as usual, the flower was delivered, he took off the wrapping paper and then picked up the telephone to call Detective Superintendent Morell who, when he retired, had moved to Lake Siljan in Dalarna. They were not only the same age, they had been born on the same day-which was something of an irony under the circumstances. The old policeman was sitting with his coffee, waiting, expecting the call. "It arrived." "What is it this year?" "I don't know what kind it is. I'll have to get someone to tell me what it is. It's white." "No letter, I suppose." "Just the flower. The frame is the same kind as last year. One of those do-it-yourself ones." "Postmark?" "Stockholm." "Handwriting?" "Same as always, all in capitals. Upright, neat lettering." With that, the subject was exhausted, and not another word was exchanged for almost a minute. The retired policeman leaned back in his kitchen chair and drew on his pipe. He knew he was no longer expected to come up with a pithy comment or any sharp question which would shed a new light on the case. Those days had long since passed, and the exchange between the two men seemed like a ritual attaching to a mystery which no-one else in the whole world had the least interest in unravelling. The Latin name was Leptospermum (Myrtaceae) rubinette . It was a plant about ten centimetres high with small, heather-like foliage and a white flower with five petals about two centimetres across. The plant was native to the Australian bush and uplands, where it was to be found among tussocks of grass. There it was called Desert Snow. Someone at the botanical gardens in Uppsala would later confirm that it was a plant seldom cultivated in Sweden. The botanist wrote in her report that it was related to the tea tree and that it was sometimes confused with its more common cousin Leptospermum scoparium, which grew in abundance in New Zealand. What distinguished them, she pointed out, was that rubinette had a small number of microscopic pink dots at the tips of the petals, giving the flower a faint pinkish tinge. Rubinette was altogether an unpretentious flower. It had no known medicinal properties, and it could not induce hallucinatory experiences. It was neither edible, nor had a use in the manufacture of plant dyes. On the other hand, the aboriginal people of Australia regarded as sacred the region and the flora around Ayers Rock. The botanist said that she herself had never seen one before, but after consulting her colleagues she was to report that attempts had been made to introduce the plant at a nursery in GÃ¶teborg, and that it might, of course, be cultivated by amateur botanists. It was difficult to grow in Sweden because it thrived in a dry climate and had to remain indoors half of the year. It would not thrive in calcareous soil and it had to be watered from below. It needed pampering. The fact of its being so rare a flower ought to have made it easier to trace the source of this particular specimen, but in practice it was an impossible task. There was no registry to look it up in, no licences to explore. Anywhere from a handful to a few hundred enthusiasts could have had access to seeds or plants. And those could have changed hands between friends or been bought by mail order from anywhere in Europe, anywhere in the Antipodes. But it was only one in the series of mystifying flowers that each year arrived by post on the first day of November. They were always beautiful and for the most part rare flowers, always pressed, mounted on watercolour paper in a simple frame measuring 15cm by 28cm. Excerpted from The Girl with the Dragon Tattoo by Stieg Larsson All rights reserved by the original copyright owners. Excerpts are provided for display purposes only and may not be reproduced, reprinted or distributed without the written permission of the publisher.
► Shelf Browser
► MARC Record