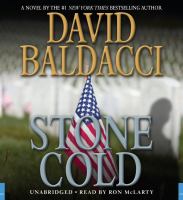 The modern-day paladins of the Camel Club are back in their third exciting adventure (after 2006's The Collectors). Justice-seekers Milton, Caleb, Reuben and honorary member Alex Ford, a Secret Service agent, are led by feisty Oliver Stone, aka former CIA assassin John Carr. Their associate, Annabelle Conroy, is a slick con artist on the run after stealing $40 million from lunatic casino owner Jerry Bagger, who killed her mother. Oliver's CIA past distracts him from Annabelle's cause: his old unit, Triple 6, was responsible for the death of Raymond Solomon, branded a traitor during the Cold War, and now Solomon's son, DHS security expert Harry Finn, is picking off Triple 6 members. Oliver could be next if Carter Gray, his former boss, reveals that John Carr isn't really dead. Gripping, chilling and full of surprises, Baldacci's latest reveals the anarchy that lurks under the slick facade of corrupted governments. (Nov.) (c) Copyright PWxyz, LLC. All rights reserved

*Starred Review* It's difficult to decide how seriously to take a thriller about a conspiracy theorist named Oliver Stone. Baldacci does make an oblique reference to the fact that his protagonist shares the name of a noted conspiracy-minded film director, so we know it's no accident. But does this mean that the Camel Club novels (The Camel Club, 2005; The Collectors, 2006; and now this one) have taken a lighthearted turn, or is Baldacci just having a quick bit of insider fun before cranking into narrative overdrive? The latter, definitely. Annabelle Conroy, con artist extraordinaire, might have bitten off more than she can chew: she's bilked a casino owner (the wonderfully named, scenery-chewing Jerry Bagger) out ofÂ  $40 million, and he isn't taking it well. Now Annabelle and her cohorts are on the run fromÂ Bagger's murderous rage. Oliver and his band of associates circle the wagons to protect Annabelle, but Oliver's having a tough time concentrating, as someone is killing off his old friends and colleagues, and it looks like Stone's name is now at the top of the hit list. When Baldacci is on fire, nobody can touch him, and this is an exhilarating thriller: fast paced, with a cast of engaging characters, a couple of mind-wrenching plot twists, and a general air of derring-do that keeps the proceedings from getting too heavy. Let's hope this isn't Oliver Stone's last appearance.--Pitt, David Copyright 2007 Booklist

Revenge is a dish best served "stone cold." In Baldacci's third novel in "The Camel Club" series-after The Camel Club and The Collectors-Oliver Stone, aka John Carr, ex-CIA assassin, is back with his eclectic group of conspiracy theorists. Their mission is to discover the truth behind the American government's lies. This time the group is trying to protect Annabelle, an honorary group member, as she is being chased with the certainty of being killed by casino king Jerry Bagger, whom she conned out of $40 million in avenging her mother's murder. Concurrently, Harry Finn, a Homeland Security contractor, is himself out for revenge, against the people who framed and killed his father, a Cold War spy. Finn's targets include such people as ex-intelligence chief Carter Gray, senator and presidential hopeful Roger Simpson, and, if Harry discovers he's not dead, John Carr. Baldacci's intricately woven plotlines, well-developed characters, fast-paced action, and surprise ending will leave readers satisfied and wanting more. A sequel worthy of its predecessors; highly recommended for all fiction collections. [See Prepub Alert, LJ 7/07.]-Susan O. Moritz, Montgomery Cty. P.L.s, MD (c) Copyright 2010. Library Journals LLC, a wholly owned subsidiary of Media Source, Inc. No redistribution permitted.