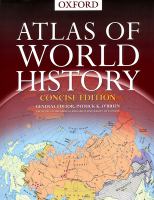 This volume ambitiously reflects world history visually and textually. Since the volume is smaller than traditional atlases, font size is small and difficult for prolonged use. It is arranged in five major chapters covering the ancient world, medieval world, early modern world, age of revolutions, and the 20th century. The introduction is followed by geographical and historical treatment of certain periods, accomplishments, and major events, although their order is not always apparent. A wide range of images accompany the narratives, as do maps, which are small and focused on a time period, specific routing, migration, development of a population, battle, trade pattern, or development in agriculture, technology, or urbanization. As one might expect, the richest content of this atlas is its maps, which use color effectively and have good legends, but georeferencing is not clear. There is no list of maps, requiring much turning of pages. Indexing is helpful but tends to point to the text rather than the maps; the bibliography is basic. Current events of the last decade are unevenly treated. The title should make clear how concise the coverage is. Most appropriate for primary and secondary school students or personal use. ^BSumming Up: Optional. General readers. J. Gelfand University of California, Irvine

This useful resource is also dangerously absorbing, allowing readers to pore over charts, maps and short articles on such subjects as the golden age of Athens, the 16th-century expansion of the Mughal Empire through India, the foreign policy of Mao Zedong and the break-up of the Soviet Union. This overview of human history, with 450 maps and 160 illustrations, begins with the emergence of Homo sapiens and culminates with the post-WWII era, moving among various regions of the globe in chronological order. It's divided into sections on ancient, medieval, early modern, Enlightenment and 20th century history, with easy-to-read two-page entries covering such subjects as "Barbarian Invasions of the Roman Empire, 100-500" and "The Development of Australia and New Zealand Since 1790." The section on postwar life includes charts showing migration patterns, female enfranchisement, distribution of wealth across the globe and changes in the environment. O'Brien, a professor at the London School of Economics, has done a fine job editing this concise edition, an excellent gift book for students of history. (Nov.) (c) Copyright PWxyz, LLC. All rights reserved

A synopsis of the world's political, social, and economic history, this title contains 450 color maps, as well as some other photographs and illustrations. Each of the five major chapters-"Ancient World," "Medieval World," "Early Modern World," "Age of Revolutions," and "Twentieth Century"-begins with a general introduction, followed by two-page segments summarizing different geographic regions and major trends or events. The book ends with an extensive index and a bibliography. The maps illustrate battles, conquests and exploration, trade, agriculture and industry, political boundaries, conflicts and colonies, urbanization and migration, and the spread of languages and religions. Given its tremendous scope, the text functions primarily as an overview, with the maps providing the real value. Therefore, it is puzzling that maps are not listed; a subject classification of maps would have greatly enhanced the book's usability. Despite the air of objectivity, certain omissions are noteworthy, e.g., in the segment on Latin America since 1945, the Cuban Revolution is relegated to an image caption, and mention of Colombia is curiously missing in the map on U.S. intervention in the region. Likewise, U.S. political intervention to further its economic objectives in the Middle East is altogether omitted, while the "War on Terrorism" and the events of 9/11 receive marked attention. Suitable for high schools, this may be too simplistic for students on the university level.-Anna Youssefi, Rice Univ. Lib., Houston, TX (c) Copyright 2010. Library Journals LLC, a wholly owned subsidiary of Media Source, Inc. No redistribution permitted.

A smaller and considerably less expensive version of the atlas published in 1999 and reviewed in our March 15, 2000, issue. The number of maps is the same, but the ready-reference sections that follow the maps in the original edition have been omitted. Some of the text has been updated; for example, there are references to the September 11 attacks and the ensuing war in Afghanistan.