Suburban nation : the rise of sprawl and the ... decline of the American Dream / Andres Duany, Elizabeth Plater-Zyberk, and Jeff Speck. Read More 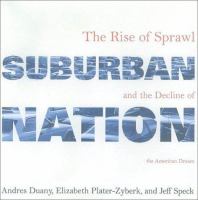 Suburban Nation : The Rise of Sprawl and the Decline of the American Dream
by Duany, Andres; Plater-Zyberk, Elizabeth; Speck, Jeff
Rate this title:
vote data
Click an element below to view details:

Suburban Nation : The Rise of Sprawl and the Decline of the American Dream


A manifesto by America's most controversial and celebrated town planners, proposing an alternative model for community design. There is a growing movement in North America to put an end to suburban sprawl and to replace the automobile-based settlement patterns of the past fifty years with a return to more traditional planning principles. This movement stems not only from the realization that sprawl is ecologically and economically unsustainable but also from a growing awareness of sprawl's many victims: children, utterly dependent on parental transportation if they wish to escape the cul-de-sac; the elderly, warehoused in institutions once they lose their driver's licenses; the middle class, stuck in traffic for two or more hours each day. Founders of the Congress for the New Urbanism, Andres Duany and Elizabeth Plater-Zyberk are at the forefront of this movement, and in Suburban Nation they assess sprawl's costs to society, be they ecological, economic, aesthetic, or social. It is a lively, thorough, critical lament, and an entertaining lesson on the distinctions between postwar suburbia-characterized by housing clusters, strip shopping centers, office parks, and parking lots-and the traditional neighborhoods that were built as a matter of course until mid-century. It is an indictment of the entire development community, including governments, for the fact that America no longer builds towns. Most important, though, it is that rare book that also offers solutions.
► Shelf Browser
► MARC Record